Despite the fact that the name Red Dot Museum evokes a clear association with Singapore for many (“Little Red Dot” is a phrase that is sometimes used referring to this country), the museum was founded in 1955 in Essen (Germany) as a platform to showcase outstanding works of modern industrial design, where each of the exhibits is the winner of the Red Dot Design Award. There are several criteria for this prestigious award, including: aesthetics, innovation, functionality and originality of concept. 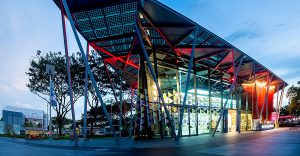 The Singapore Red Dot Design Museum was opened in 2005 and is the first and only of its kind in Asia. Originally located on Maxwell Road, it moved in 2017 to its current glass-fronted building in the Marina Bay Scenic Waterfront District, formerly home to the Marina Bay City Gallery, which exhibited blueprints and mock-ups of the area’s future layout. The building, designed by the architectural bureaus Cox Architects (Australia) and Architects 61 (Singapore), has a strict geometric shape, on the one hand, and at the same time looks quite playful and dynamic, thanks to the steel elements included in its design and an unusual overhanging roof, on the other. It is worth noting that on the occasion of the Red Dot Museum’s move here, the building underwent reconstruction, the project of which was developed and implemented by the designers and engineers of the MAKK Architects studio, in particular, a second level was added, which significantly expanded the future exhibition spaces.

The striking geometry makes it possible to call the building one of the most remarkable objects of this region, which is rich in terms of interesting architectural finds. 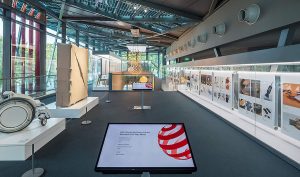 The museum’s “Permanent Collection” consists of the finest specimens that have passed a rigorous selection and received the coveted “quality mark” Red Dot and, therefore, a well-deserved place in the exhibition hall. This is a real “collection of wonders” from many countries, from Belgium to Japan, and, of course, the creations of local award winners. For example, a wallet that sorts banknotes and coins, or Jonathan Saphiro Salim’s Waist Bowl, who came up with a simple and elegant solution to the design of a bowl for soups and muesli, which allows you to effortlessly hold the bowl with one hand, and also quite easily turn it over. ; plus the Waist Bowl retains heat very well and prevents the contents from spilling.

Even the floor and ceiling are showpieces here: Dickson flooring can adapt like a chameleon to its environment, changing with lighting and interior design, creating stunning 3D holographic effects in space. This striking property is achieved through the reflection of light rays from the two-color threads of the coating and is enhanced by its texture and the special arrangement of patterns. HeartFelt® is an innovative modular ceiling system based on felt, a natural, sustainable material with a pleasant appearance and excellent acoustic properties.